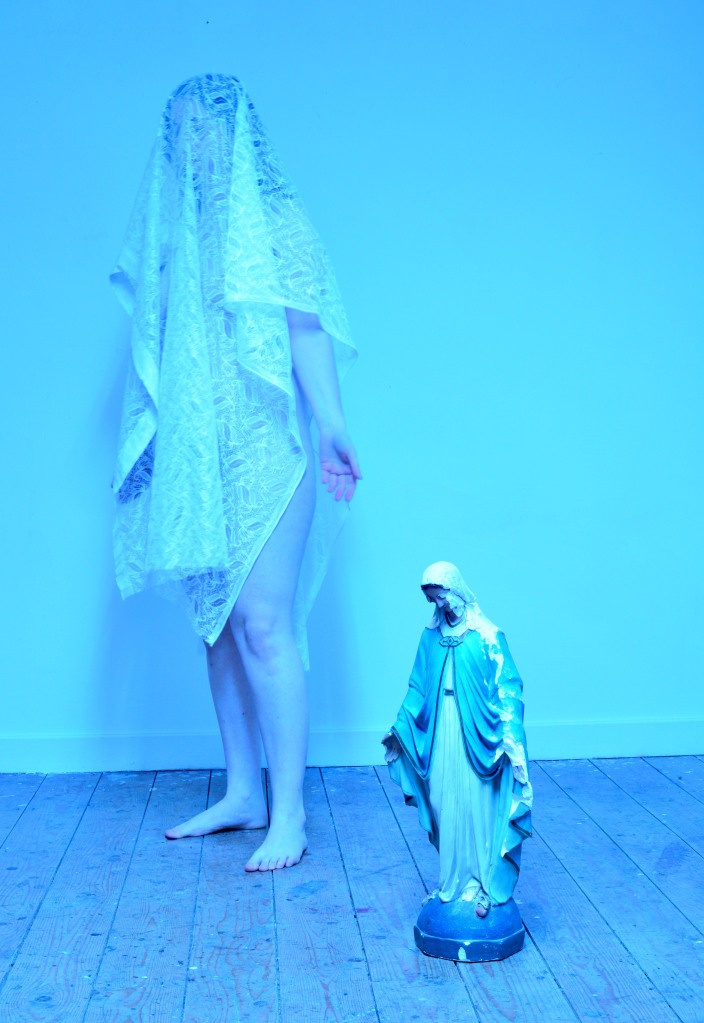 In 2008, I was injured in a car accident and after much treatment my condition worsened, and eventually I was diagnosed with chronic neuropathic pain. Over the years my condition became increasingly limiting and affected not only my body but my mind and soul too which made daily living difficult. Eventually I began the process of acceptance of the condition and began making works using analogue photography and my own body as my mediums. My research became internalised and I began by seeking to represent my physical and emotional pain as visual.

I researched the idolisation of Virgin Mary as an icon of suffering. I was interested in the Virgin Mary because I was troubled by how much her story affects my own consciousness. To paraphrase comedian Dara O’Briain: I am not a religious woman, I don’t even believe in God, still Catholic though. Baptised and indoctrinated before I could think, speak, or choose – I,  a humanist, am burdened with feelings of both love and resentment for Catholic icons. Shrouded Consciousness is a statement on a complex set of oppositions between an idolised stone form and a real human body. Inescapably, this photographic image is imbued with ambiguity. That is the nature of the photographic image in general but the ambiguity has further layers because of my recovering catholicism. There is love and respect, for the archetypal great mother, evident in the image which often leads, perversely, to viewers remarking on my presumed religiosity.

Initially I saw the piece as a rejection of the veneration of female suffering by juxtaposing a stone Virgin Mary statue with my real human body and flesh of suffering. The diminutive statue is dwarfed by my living body. Using long exposure times I sought to emphasise the stillness of the statue as an object, as a counterpoint to the movement of my human body via the breath and heartbeat. Shrouded Consciousness emerged from the ether as I worked on a series of planned poses with the statue.

I was shooting with an analogue camera, using a timer and a tripod. I had the set the scene, trigger the timer, run into the frame and pose. I could not view the scene with my body in it, I could only plan and predict. As I worked and played with the camera, scene set-up and lighting it became apparent that this process was also triggering feelings of bodily shame and sexual repression. Impulsively I grabbed a net curtain and tossed it over my head in a manner one sees a tired child play with a blanket. I twirled, I stopped, the camera clicked on the timer and I knew I was onto something. In the darkroom at my studio, I developed the negatives and printed the image at quite a small-scale at 6×4 inches.

A couple of months later two visiting curators asked if I would consider making the same image but much larger for exhibition purposes. I explained that the analogue equipment I was using would not allow me to print at large scale due to quality constraints but the proposition intrigued me. I decided to ‘go digital’ which allowed for large-scale printing, colour and more control of the production of the photograph. As colour photography was now an option for me but not necessarily desired, I decided to ‘play’ with light in order to achieve a monochrome effect like the original analogue shot but this time I worked on creating a Virgin Mary blue cast on the scene. Bathing my own body in the virgin’s colours underscores the ambiguity of the image. The beauty of the colour serves to enhance the sense of my connection to the archetype, it is a loving colour, but, it is also the colour of sorrow. Also it is often the colour I most associate with my physical pain. However the nakedness and concealment of my body in the presence of the Virgin Mary is inescapable, some may even say blasphemous. The veil/shroud is symbolic of the effect of the idolisation of Mary and a Catholic upbringing has had on my psyche. The shroud will always be there colouring my perspective and feelings as a recovering Catholic, all that is left is shame.

The expectation of suffering and martyrdom of women in Irish society is borne out of our Virgin Mary Complex which is a deeply ingrained, conscious and unconscious, belief that women should suffer.

The confinement and treatment of women and children in Magdalene Laundries is truly the greatest shame of our nation since the famine.  Its legacy is a culturally embedded belief in matriarchal martyrdom that affects women to this day.  The nuns’ cruel treatment of women and girls in the laundries and their continued unwillingness to apologise betrays the Church’s and the sisters’ conviction that women deserve suffering in the context of their gender and fertility. The survivors of symphysiotomy, a barbaric procedure which involved sawing a woman’s pelvic bone in half, know all about suffering. Their bodies were broken by doctors who were trying to control female fertility in a time and place where contraceptives were illegal due to the moralising of reputedly celibate men of God.

The legacy of our cultural perception of women’s fertility as one that involves martyrdom can be seen in the contemporary debate on abortion. We live in a country where a medical team forced a teenage migrant rape victim to carry her pregnancy to the cusp of viability in order to deliver a preterm child who will face tremendous suffering. A country where rape victims who become pregnant are expected to stoically endure bearing a pregnancy conceived in violence and violation. A culture where women enduring a painful and high-risk miscarriage are left to suffer and, in many cases, die for the ideology of motherhood despite the fact that the fetus would not survive.  We live in a country that refuses to help women whose pregnancies have been given a diagnosis of fatal foetal abnormality, endure their trauma privately to full term.  A country that exports 12 women a day to the UK for terminations of crisis pregnancy. For shame.