For those of us in a state of long-term, near constant pain describing the sensations of our physical pain can be an arduous process. As an artist I have a natural inclination towards visual imagery and I was often frustrated that the many doctors I visited could not provide me with a picture of my pain or injury. I developed a strong desire to render my pain visible, I thought that I wanted a scan or other medical record which would make my pain an irrefutable fact that no one could deny, ignore or downplay. Of course this was in part due to my defensiveness and worry about not being believed, but there was something else, something subconscious at work here. I think on some level I understood that through art I could help myself come to terms with what had happened to my body and mind as a result of chronic pain.

I began by researching physical pain through medical, philosophical and psychological theory. I spoke to people who had a helpful understanding and insight into my condition and withdrew from conversations with those who could not understand. Simultaneously I was engaged in a dialogue with my body and mind, using mindfulness meditation to explore the sensations I felt and my responses to the pain. Informed by research, I searched my mind and soul for an explanation as to ‘why me?’. I tried to be fearlessly honest with myself but also aware that I was not to blame for what had happened to my body and I refuse to discuss it with anyone who seeks to label some part of my character as responsible for the absence of healing in the affected areas of my body.

I made this Blue Series in early 2013 and I chose the colour blue for because I associate with sadness, mourning, spirituality and mortality. My Blue Series documents and represents my journey through mourning for, and acceptance of, my broken body. As part of this spiritual journey I began walking by the River Lee in Cork and collecting objects I found on the muddy banks. The objects had been weathered and often transformed by the water and I was drawn to them as symbols of decay and transformation. I was also interested in the river as a symbol of the subconscious mind and I allowed my darkest thoughts to surface while searching by the river and gradually I began to see the intersections between my physical pain and emotional trauma including post-traumatic stress disorder (PTSD) and anxiety.

In my studio I experimented with the these found objects; glass, rusted metals, barnacles and bones. Over an extended period, I figured out how I would be able to use these objects as symbols of pain in self-portraits. I set up a camera on a timer and lights covered in a blue ‘gel’. I then performed a variety pre-planned poses for the camera. Next I carefully selected the shots and had them printed, life-sized on a heavy ‘hahnemuhle’ fine art paper.

The first print I worked on was ‘A Growing Dis-Ease’ 2013, which involved gluing barnacles to the surface of the print to convey how pain had latched onto my body and was spreading from my left shoulder area. The title also refers to how PTSD made me feel at ill-ease. 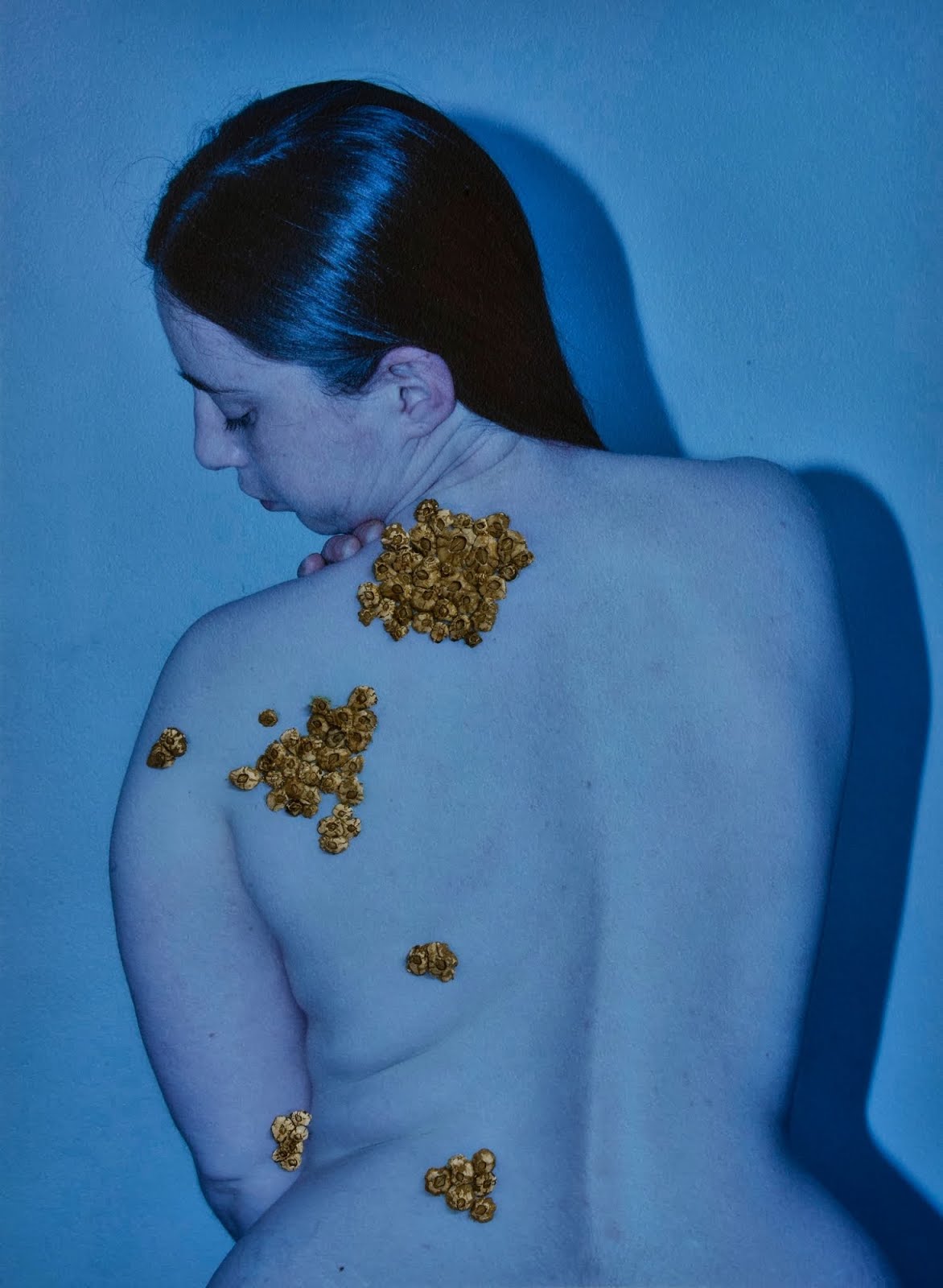 The second print was called ‘Amplification’ 2013 and it refers to how the mind seeks to understand a long term pain by ‘amplifying’ the sensations from the affected area. I used rusted metal pieces to punch through the surface of the image of my body. The metal protrudes from the image of my body in a visual reference to the disruption of the body and mind caused by neuropathic pain signals. 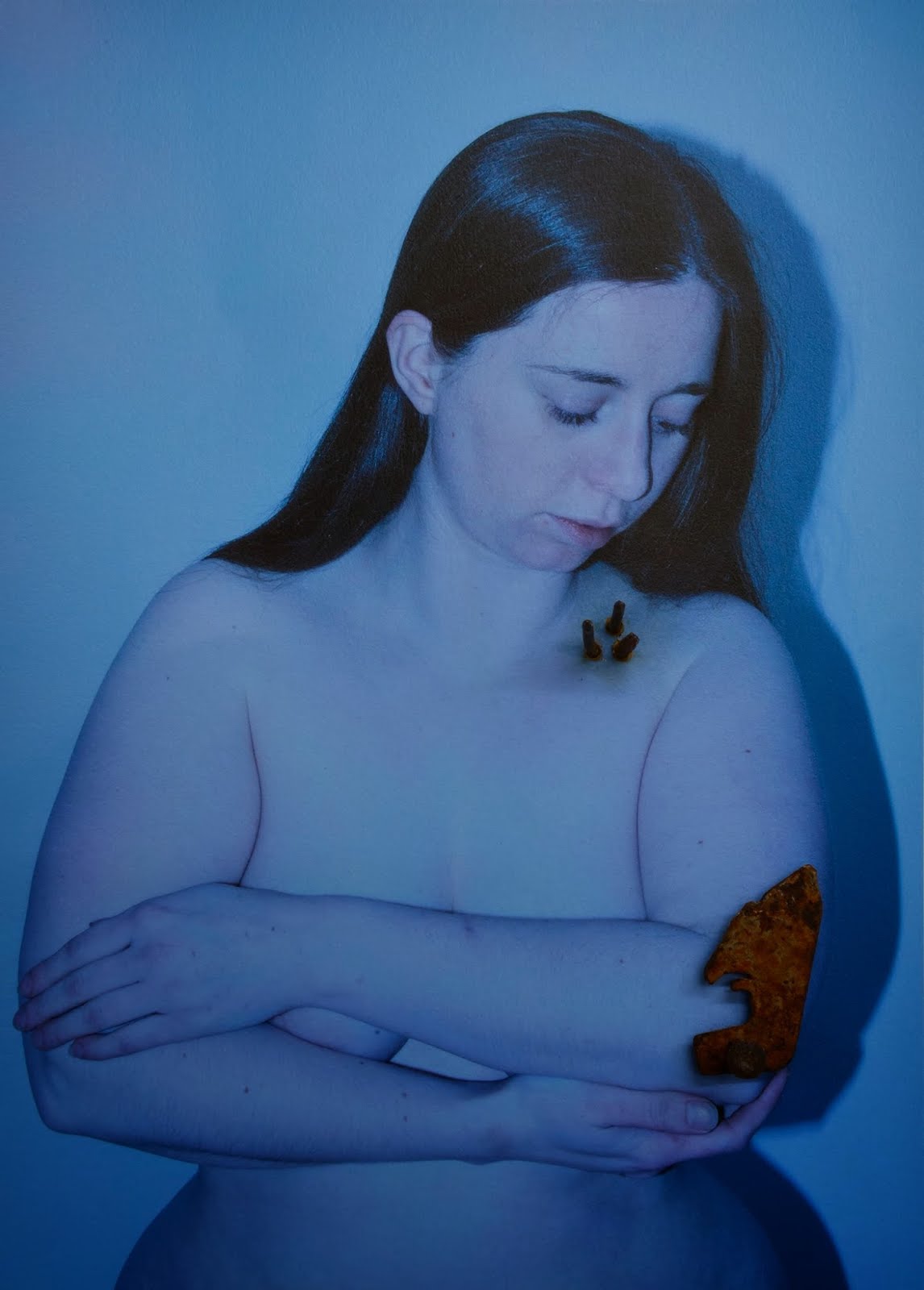 My third print, ‘Hypersensitivity’ 2013, refers to another type of pain signal that leaves the skin hypersensitive to touch. This sensation is conveyed by covering specific parts of the image of the body in a layer of crushed coloured glass. 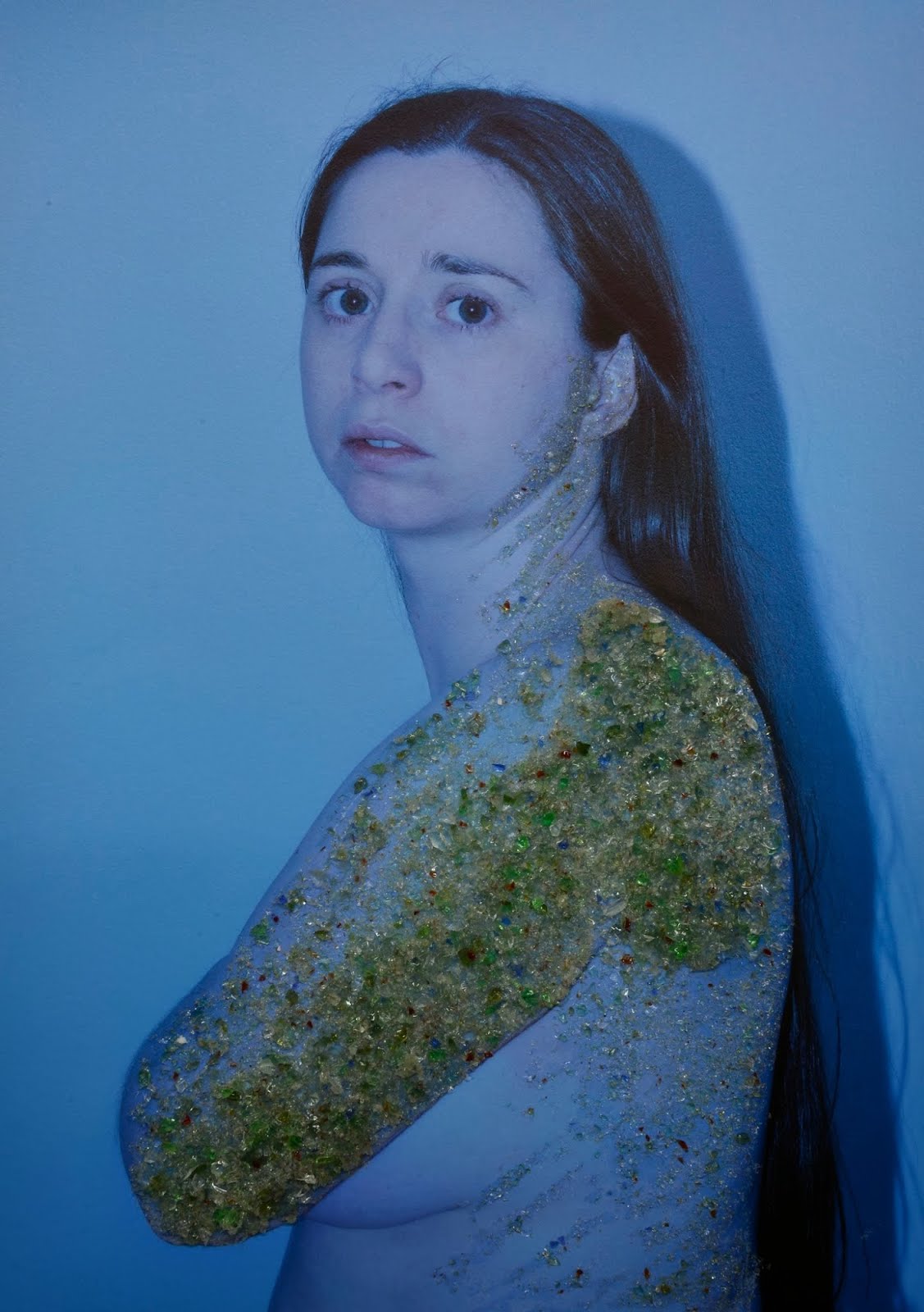 The fourth and final image, ‘Dysmorphia’ 2013, is a visual description of temporomandibular joint disorder or TMJ. I have been experiencing nervous clenching and bruxing of my jaw joint which I believe is a symptom of PTSD and possibly related to an injury. My TMJ could be described as a hard pain accompanied by a sense of a swollen and mutated ear and jaw joint. I therefore use a found animal bone to represent my dysmorphic impression of my jaw and ear. I cut out a section of the image and inserted the bone into the paper. 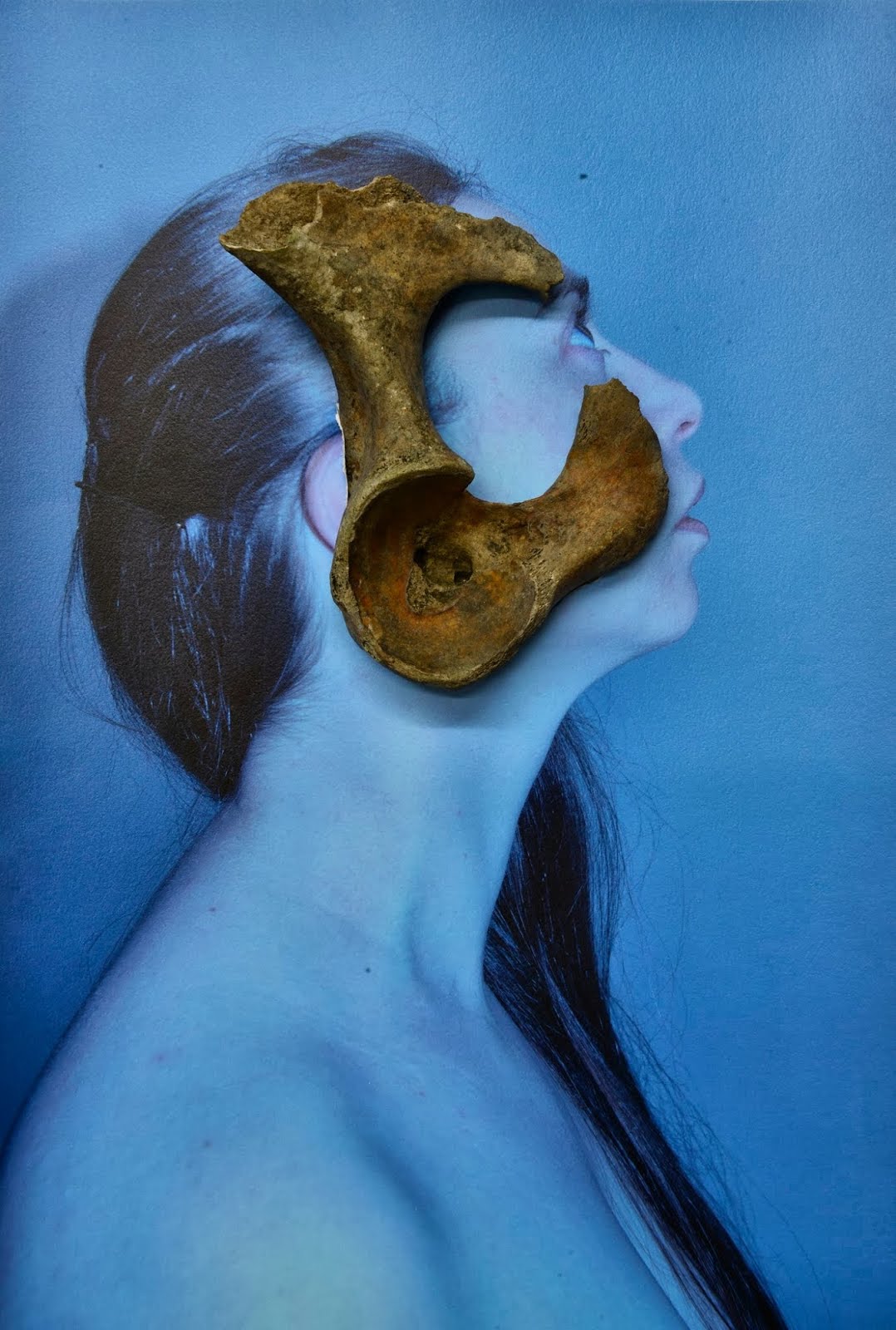